Today’s world tour of flatbread takes us to…France! Or Italy. Or Turkey. Let’s just go cruise the Mediterranean, yes? And while we’re at it, let’s eat some chickpea flatbread.

Socca (pronounced SOCK-a, not SO-ka) is a wonderfully easy flatbread to make. You just mix it up and bake it, and for the most part…that’s it. It’s adaptable to a range of spices and additions (like sauteed onions? Toss ’em in!) and can serve as an appetizer or dinner. Adjust slice size accordingly.

So what is it? Socca, a French word, is also known as farinata in Italian. It’s a flatbread made entirely of chickpea flour, so it’s got a flavor unlike most of the other flatbreads we have known. It’s gluten-free (because chickpeas), so you celiac folks can dig it. Socca has literally been a food item for a millennia. Origin stories credit its development to Roman soldiers in Nice, France, circa the 1st century BCE. Or as the result of invasion by Turkish forces. Or that it was developed in Sardinia. And so on. Food travels along trade routes as well as the trade, so it’s difficult to determine who made socca first. We’re just glad someone did. Thanks, ancient smart foodie!

Here’s a link to a .pdf file of Socca with rosemary halloumi fig jam, so click to print, for the ingredient list, or for a straightforward how-to.

And so. Let’s get going.

Preheat the oven to 450°F (230°C) and put your oven-safe pan in to heat with it. I used cast-iron for this, mainly because I have one and I’ve used it so much it’s practically a non-stick pan on its own. If you don’t have cast-iron, stainless steel is perfectly fine, so long as your pan doesn’t have a rubberized handle or anything. Anyway, let that heat. Chop that rosemary.

Mix your flour, rosemary, salt, and pepper. Then add the water. 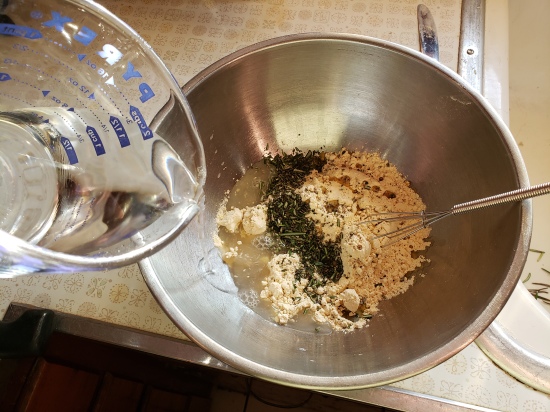 Mix it all together thoroughly. It should have the consistency of a heavy cream. With, you know. Chunks of rosemary floating in it. Set it aside until the oven is ready. You can let this sit for however long is necessary. You can even let it rest for up to a day, if for some reason you need to mix your socca immediately but don’t have the extra 15 minutes to bake it off.

Halloumi comes to us from the island of Cyprus, and it’s primarily known because it doesn’t really melt. It’s grillable. You can set it on fire. It will survive, intact, under a broiler. And when you bite it, it issues an adorable squeak. I mainly chose it for this dish because it wouldn’t melt and I wanted the pockets of cheese for texture. Try to find a non-melting cheese if halloumi is hard to come by. Ricotta salata would be a good second choice.

When the oven is ready, pour one tablespoon of olive oil into your hot pan so it coats the bottom. Pour in the batter and then put the diced cheese into the pan so it bakes along with the flatbread. 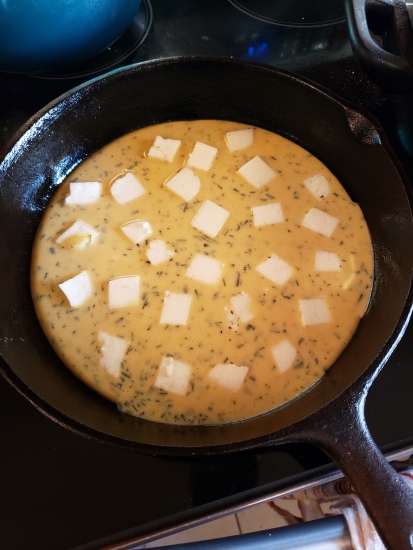 And then it all goes into the oven, where you’ll leave it alone for 10 or 12 minutes. When you do check the socca, it should look cooked through and dry along the top. Not dusty-desert dry but rather, cooked-all-the-way-through dry. Switch your oven function over to broil. Take that remaining tablespoon of olive oil and coat the top of the socca, then put small dollops of fig jam all around the cheese. I used an insanely delicious fig butter that I may or may not have gotten from Trader Joe’s, but I will neither confirm nor deny the source until I have their sponsorship. 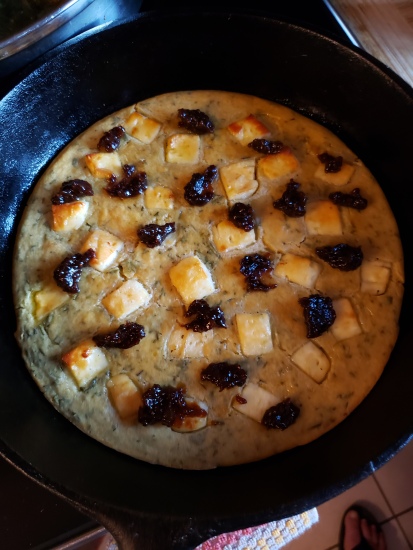 Put this beautiful thing back under the broiler for a minute or two, just to get it nice and brown and gorgeous, and to set the jam a little. Take it out and cut it into wedges. You can halve each of the full-size wedges if this is party food or an appetizer. 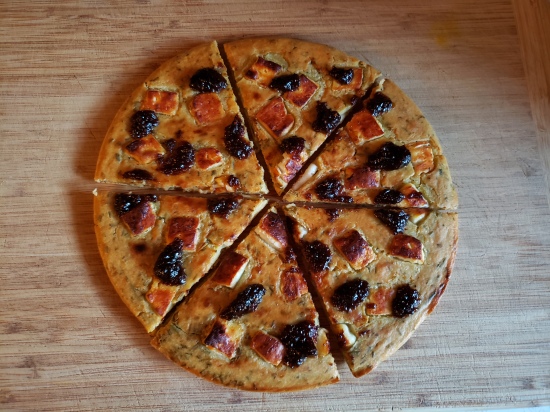 Oh, man. The fragrance of the rosemary. The sweetness of the fig jam. The salty squeaky snap of the halloumi. This dish is a party unto itself.

And then serve it with…

BONUS RECIPE! Click here for the .pdf for Kale with Garlic and Oranges.

This is another trip through the Mediterranean. The first time I heard of this recipe, the chef used fresh spinach. I’m sure it was delicious but I couldn’t see putting spinach through a 20-minute cook time, and you can’t make it a flash in the pan because you need to cook the orange rind. I decided I wanted something a little more hearty that would stand up to a bit more heat. Hence, kale. I swear by all that is holy that some day I will sit in a little taverna in the Peloponnese region and eat this while overlooking some ruins, or olive groves, or a crisp blue sea. For now, I have to make do with my little kitchen in central PA and a travel app on my Fire TV. At least the eating is good here.

Briefly, chop everything and put it in a large saute pan. 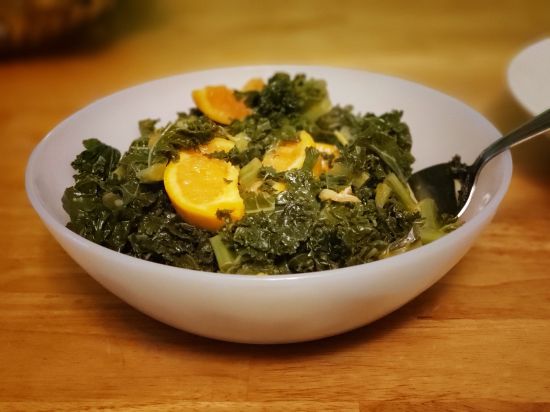 I know, cooked oranges are weird, right? Wrong! It’s only weird because we’re not used to it. The bitterness of the orange pith mellows, the kale gets sweeter and soft, as does the garlic, and there’s a wide range of textures from the ruffles of the kale to the chewiness of the oranges to keep you entertained through your meal.

All I need is a glass of rosé to make this dinner…merveilleux. Eccelente? Mükemmel. Enjoy it however you see fit! There’s a lot of latitude here.

I have often had the idea, when thinking of the ancients, that their food was, you know. Meh. Probably kind of boring, the equivalent of eating a bowl of wallpaper paste with some weak beer. And I know that’s not true, logically. They figured out how to cure olives! (Which is no small feat, I tell you.) They invented wine! They ate cheese! Since at least the 8th century B.C., cheeses like feta were in process, and some of that? Went into a griddle bread.

This recipe, for bread made of flour, honey, and feta cheese, rocked out with some oil in a hot pan, dates from about the second century B.C. I found a variation of this recipe that uses rice flour and feel free to go for it if you have gluten issues. I made my bread with regular AP flour.

Here’s what you need:

Here’s what you do:

Put cheese, honey, and salt in a mixing bowl and mash them all together. It takes a little work to smash down the feta, but perseverance does the trick. 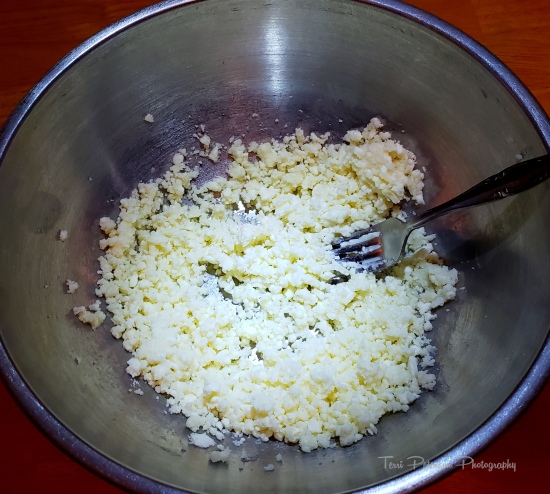 Add the half-cup of flour and mix until a ragged dough starts to form. This won’t take very long. Turn it out onto your work surface, that you’ve already dusted with flour.

Knead, just for a few passes. It should come together pretty quickly and smooth out into a nice round ball. Bonus if you can get the dough to look like it’s smiling at you.

Wrap your dough in plastic and let it rest for twenty minutes. You can just leave it on the countertop; you don’t have to put in a proofing spot or the fridge or anything. Just let it sit.

After twenty minutes, unwrap the dough and cut it into twelve equal-ish chunks. 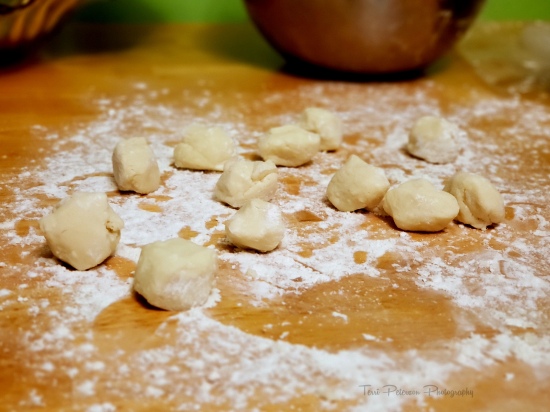 And roll them out into thin discs about 3 inches in diameter.

To cook, put them in a medium-hot pan with a little olive oil, and fry until golden and delicious. They should only take about a minute or so per side, so don’t go wandering off.

And there you have it.

The recipe that I worked off of suggested serving them warm with an additional drizzle of honey (which sounds amazing) or wrapped around something savory, like…roasted asparagus.

Preheat oven to 425°F (220°C). Take one bunch asparagus and snap off the woody ends. Place the asparagus in a roasting pan and toss with olive oil, salt, pepper, and the seasoning of your choice; today, I used herbes de Provence. When the oven is ready put the asparagus in for 20 minutes. While it’s roasting, toss a handful of pine nuts (if you have them) into a dry pan and toast on your stovetop until they are golden-toasty and even more deliciously nutty, and then remove them from heat lest they start to burn. Which they will do, easily, so don’t walk away while they’re toasting. If you don’t have pine nuts that’s fine, your asparagus will be perfect anyway. And that’s it. When the 20 minutes are up, remove the asparagus from the oven, wrap a few stalks in a piece of feta-honey griddle bread, and enjoy.